Lately, there’s been a lot of fanfare around Gentleman Jack, the HBO production that brings to life part of Anne Lister’s copious nineteenth-century diaries. I’m a little behind on the episodes, but I’ve seen the first two, and am looking forward to the rest. The show is smart, funny, with high production quality, and a certain tongue-in-cheek quality that gives it a fun campiness that is perfectly appropriate to the life story of one of British history’s queerest ladies. 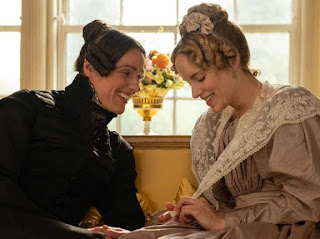 Suranne Jones as Anne Lister (left) and Sophie Rundle as Ann Walker
Yes, Anne Lister was a lesbian. And she wore an outfit that was rather masculine for the time period—though she did often wear skirts as well, in keeping with the time period and her class status. And I write about cross-dressing women in literature of the eighteenth century. So, needless to say, people keep telling me about Anne Lister and Gentleman Jack—and as I mentioned on Twitter: I am aware.
I know that sounds snarky to say, but part of me bristles a bit at the idea that people who know my work would think that I had never heard of Lister. On the other hand, I understand that people who know my work are excited to finally have access to a pop culture artifact that relates to my research and, in general, their enthusiasm is awesome.
Because the story of Anne Lister really is amazing and intriguing—and it changed much of the thinking about the history of sexuality. Sexuality has a history, and there are hundreds of scholars from many different disciplines, geographical areas, and time periods who are studying what sex meant in the past. My work on lesbian desire and female cross-dressing fits squarely into this area of study, as I’m interested in how women who dressed as men became an object of fascination for the reading public of the eighteenth century and, moreover, how such “butch” women appealed to “femme”/“straight” women in the past. Some women who wore men’s clothing did indeed actually live as men, and in studying them, we also trace the history of trans people; indeed, Lister’s gender nonconformity is an important aspect of who she (or he?) was.
But going back to Anne Lister…Lister is an important figure because she changed the discussion around sexuality. Cultural historian Michel Foucault theorized that sexual orientation became a category of identification only with the rise of Sigmund Freud’s theories of sexuality and gender roles, as well as the writings of eminent sexologists of the late nineteenth century. Prior to the late nineteenth century (so the thinking goes), people did not think of themselves as straight, gay, bisexual, etc. Those terms did not exist or were not used in the same way as today, and, as such, many scholars in the past (and today) believe that those terms cannot be used effectively or accurately to discuss people in the past.
The decoding of Lister’s secret diaries in the 1980s by Helena Whitbread changed all that. The juiciest, gossipy-est, and sexiest parts of Lister’s diary were written in a code invented by herself, and she details all her sexual exploits therein. Lister writes in her diary about being only attracted to women. Literary scholar Terry Castle discusses these segments of the diary as an important instance of a woman showing a sexual orientation that is self-aware and same-sex oriented. Castle’s arguments, along with those many others, challenged the Foucauldian ideas about when people began to have sexual identities in the modern sense. While my current research project on cross-dressing women doesn’t analyze Lister’s diaries, the scholarship that reacted to those diaries has informed my own scholarship in crucial ways.
Lister’s story is definitely a complex one, and I’m not going to get into it here. Now that there is a splashy show about her, the articles about Lister have proliferated. Everyone from Marie Claire to The Atlantic wants to tell you about Lister, how the show portrays her, and in what ways the show is awesome and ground-breaking or how it“misses the mark” etc. From being a figure relegated to the shadows of history, a footnote, a topic of scholarly discussion, Lister is out in the open now (pun intended), and everyone has an opinion about her. Some discussions opening up are important—such as whether to Lister was, in fact, a lesbian, or whether she was a trans (straight) man. There is ample evidence in the diaries that Lister did not enjoy anything having to do with being feminine or womanly, she was a tomboy growing up, and as an adult she preferred men’s clothing. The line between butch lesbian and trans man is and probably shall remain blurred since we obviously can’t go back in time and ask Lister herself, but these discussions are important ones that should serve as reminders that LGBTQ identities have always existed—and will always exist. Other discussions about the show and its depiction are perhaps less interesting (The Atlantic wants to know why Lister is presented in such a positive light, for example, as if we need more sad queers on TV).
In any case, if you do watch the show and enjoy it, I recommend you read a little more about Lister. Maybe check out Helena Whitbread’s amazing blog about decoding the diaries; or Jeanette Wintersen’s discussion of Lister; or buy the book for an amazing beach read this summer. Don’t let the show be your only source about this fascinating person. (Also: this isn’t the first time Lister’s story has been dramatized, though the Maxine Peak film is about a sadder time in Lister’s life--which I discuss in a previous blog post.)
And, of course, if you want to know about the longer history of women who dressed in men’s clothing in Britain and British literature, make sure to keep an eye out for my book, Sapphic Crossings, when it comes out at the University of Virginia Press in the near-ish future.